You are here: Home / Blog / The Ingenuity of Life of People in an Earlier Time: A Snapshot of Life in Early Jay 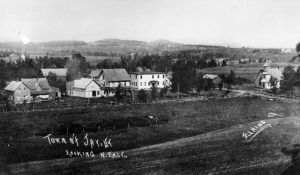 As the publisher of Vermont’s Northland Journal, I get to learn so much about the ingenuity of previous generations. This is a tiny segment of an article written by Juliette “Julie” Leblanc Bourne who grew up in Jay, Vermont, during the first half of the 20th century.

“Mother always had a huge garden, which she tended herself and it was always kept weed free. She was up early every morning. When the men went to do morning chores she’d weed the garden daily. People going by would remark on her garden. She canned just about everything, vegetables of all kinds as well as chicken, potted beef, and there was always salt pork.
The butcher made the rounds in the summer every Friday with his wagon of fresh meat. Mother bought roasts or steaks for the weekend and the coming week. This meat was usually placed in large glass containers with covers and lowered into the milk tank which was kept cold with ice. The coldness of being submerged in the milk tank kept the meat fresh. Another practice that was quite common in the neighborhood is when someone butchered a beef, it was shared around as it was difficult to preserve. Of course this was reciprocated when anther family butchered a beef. Once winter set in was when most of the butchering of pigs took place as well as the beef cattle. This was because the meat could be kept frozen. The hams and bacon were smoked. I have often thought that the reason ham was the Easter choice was that it was most likely the last of the pork from the long winter. We certainly ate very well. Yes, we were poor, but warm and never hungry, and my mother was a good cook. I don’t think we knew we were poor. We had our own meat, dairy products, berries, maple sugar and apples.
There were two large apple orchards on our property. They were enjoyed throughout the fall and winter as my father stored them in the cellar. He also had bins for potatoes, beets, and carrots. Cabbages were hung up by the stems. This allowed us to have cold slaw most of the winter. Mother brought a cabbage up Saturday night, trimmed it, then let it sit in cold water so that by Sunday noon it was crisp and ready to prepare for coleslaw. My mother used sour cream and salt and pepper for dressing for the coleslaw as well as garden lettuce or sliced cucumbers. We never had mayonnaise.”
Yes, the stories I hear and read so interesting. The following is another excerpt from Ms. Bourne’s article. It shows how, while life was a lot of work, people also had fun, although they often had to improvise:
“There were occasional neighborhood parties. The furniture would be moved out of the main part of the house, and a pickup band would surface, and the dances began. There was a big feed late in the evening. The little children would be tucked in bed and the older children danced with the adults. These parties have been referred to as “kitchen tonks”. The music was usually the Morse family. Helen Morse, the mother played the piano. Her husband, Glenny and a son played guitar and violin. One son, Harvey, played the guitar and mouth organ at the same time. We were quite impressed.”

I welcome people to submit their own articles about life in the Northeast Kingdom during an earlier time. Email articles or questions to northlandjournal@gmail.com . Also consider subscribing to the Journal, a monthly magazine that helps share and preserve the history of Vermont’s Northeast Kingdom through the words of the people who lived it. To learn how to subscribe click HERE.