You are here: Home / Blog / Life in the Northeast Kingdom Following the EB5 Debacle 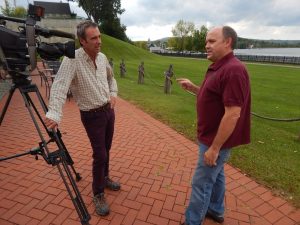 For those of you in the greater Boston area and beyond, come November, VT’s Northeast Kingdom will be featured on the Chronicle on Channel 5. The half hour show will focus on life in the Kingdom following the debacle of the EB5 Program, which included the Jay Peak Resort, the Burke Mountain Resort, and the airport in Coventry. Hopes were that the program would also serve as a catalyst to revitalize Newport’s Main Street. Journalist Clint Conley recently visited the Kingdom to interview a number of people, including myself. His purpose wasn’t to rehash the debacle, but to find out how the Kingdom is surviving economically and otherwise following the collapse. He also wanted to try to ascertain our level of optimism as we move forward into the future. This is a photo of Clint (left) interviewing me on the Newport waterfront. As for my level of optimism – I see so much positive going on in the Kingdom I can’t help but be optimistic. Besides that, being pessimistic isn’t going to get me or anybody else anywhere. —- Scott Wheeler/Publisher