You are here: Home / Don McNally: From Vaudeville to Drive-In Pioneer

Order a copy of “Don McNally: From Vaudeville to Drive-In Pioneer” 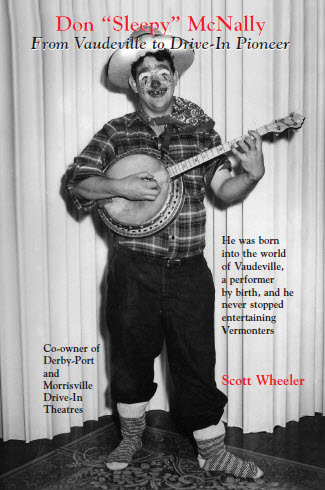 Born on June 28, 1920 on the Vaudeville circuit that traveled up and down the East Coast performing as they went, Don McNally attended 306 schools before he graduated from high school. He went on to become one of the early pioneers in the drive-in movie industry and one of the founders of the Derby-Port Drive-In Theatre in Derby Vermont, and the Morrisville Drive-In Theatre in Morrisville, Vermont.

McNally passed away on October 21, 1990, but not without leaving many memories that people cherish. Many of those memories center on the two drive-ins. He had the foresight to keep many mementoes of his life in his personal archives. And in his dying days he sat down with his friend Duncan Kilmartin of Newport and completed an audio recording of his life. Using the recordings, McNally’s archives, which include dozens of photos of his life from his Vaudeville days to drive-in owner, and with the help of his widow, Irene, and their three grown children, author Scott Wheeler of Derby, Vermont, has completed a book on McNally’s life.

Don McNally: From Vaudeville to Drive-In Pioneer looks into the life of Don McNally and the journey from his birth into a show family, his own years on the stage, his war years, and his work in the drive-in movie world, including being one of three men who owned the two drive-ins. The 128-page book is filled with dozens of photos, mementoes, and memories, sells for $10.00 (free shipping and handling in the U.S). The photos alone make this book a real keepsake.

Here is what two professionals in the Vermont entertainment world are saying about the book:

“Scott Wheeler gives us a behind-the-scenes glimpse into Don McNally”s career in vaudeville and drive-ins theaters. He vividly brings this rich period back to life, taking us into a golden age when movies and stage shows dotted the Northeast Kingdom landscape, providing a stage for young people’s rites of passage and bringing communities together around a shared cultural life.” – Jay Craven, filmmaker, Kingdom County Productions

A jaunty journey through retro-NEK and a kaleidoscopic view of a true original, Don McNally. Scott Wheeler has become the quintessential archivist of the diaries of the ordinary and making them extraordinary. His ability to chronicle genres and create a permanency of the sands of time speaks to his passion for our personal histories and hallmarking them for generations to come – Lynn Leimer, CEO/Artistic Director, QNEK Productions and Haskell Opera House Theatre Production Manager