Vermont’s opiate problem isn’t going away, but it also isn’t being forgotten. There are many people and groups working to combat the problem, including helping people battling addiction.

This Sunday Emily Robinson and Tara Patten will be on the Vermont Voice radio show, and next week they’ll be on the NEK Voice television show. They’ll talk about what is being called, “Conversations of Hope”. During their time on the shows, they’ll also talk about two upcoming events related to opiate addiction, one on Saturday, January 21, and the other on January 30th.

The VT Voice airs on Sunday mornings at 6:30 on WJJZ Country on 94.5 FM. in Derby. The Northeast Kingdom Voice airs on NEK-TV Channel 17 on Monday at 6 p.m. and Wednesday at 7:30 p.m. The shows, which are hosted by Scott Wheeler, the publisher of Vermont Northland Journal, are later posted on the Journal’s website at www.northlandjournal.com 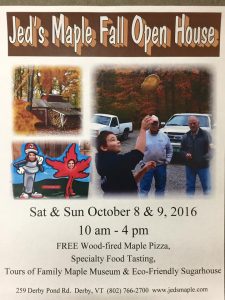 If you love maple syrup, or anything to do with it, mark this event on your calendar. Steve and Amy Wheeler, the owners of Jed’s Maple Nekmc in Derby, are hosting a fall open house. Steve and Amy, as well as their sons, have transformed Jed’s into a destination business, attracting people from near and far —– Scott