You are here: Home / Blog / Death of a Northeast Kingdom Historical Icon

A giant in the Newport/Derby area history world passed away this morning. Chester “Chet” “Ted” Carpenter of Newport was 95 years old. A native of Derby, 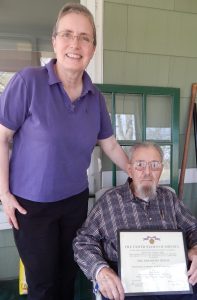 Chet was a descendant of some of that community’s earliest settlers. He was also a proud World War II veteran, one of the local soldiers who survived the sinking of the SS Coolidge during the war,

More than once I told Chet I thought he was one of the smartest men I ever met – and I meant it. Of course he’d scoff at me and tell me I didn’t know what I was talking about. That was who Chet was – a very bright, yet humble man. Those of us interested in preserving and recording the history of this part of the Kingdom revered him. He was certainly one of my greatest mentors when it came to understanding the region’s history. His ability to recall historical facts and stories was astounding.

Chet’s only surviving child, Kathy – with the help of family and friends – cared for her beloved father until his last breath. She was simply an amazing daughter to her father. They were more than father and daughter – they were a team, and they both loved collecting old postcards of the region. For many years, they were common sights at area postcard shows. Click HERE to read his obituary.

Penny and I are thinking of Kathy, and everybody else who loved this great man – truly a dying breed of American.