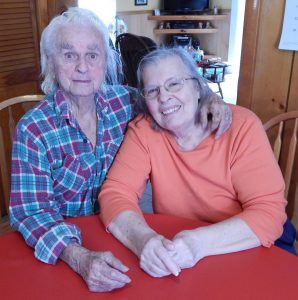 Serving Up Drinks in the Snake Pit

Throughout the generations Newport has had plenty of colorful bars, but probably none more colorful than the Snake Pit. The bar, which closed in the early 1970s, certainly earned that reputation.

“I can still see the place in my mind,” Fred Carter of Newport said as he reflected back to the early 1940s when he worked at the Snake Pit as a glass washer turned bartender. “That was quite the place.”

The bar was located in the basement of the Newport House, a hotel which stood on Newport’s Main Street between 1873 and 1973. It was located where People’s United Bank stands today.

“The hotel was a nice place,” Carter said. For that matter, he and his wife of almost 69 years, Ruth (Besaw) Carter, believe their son Jim and his wife, Patty (Prue) Carter, who married in 1973, were the last couple to have their wedding reception in the hotel.

Now 93 years old, Fred—a lifelong resident of Newport, most of it spent on the shores of the Clyde River on Clyde Street—told how he came about working at the bar. In his late teens, he was working with his father, Victor Carter, as a house painter, a job that Fred’s grandfather, Louis Carter, had also done.

“I was painting with my father and I didn’t like it,” Fred said. “In those years we used to use lead paint, and oh didn’t I get sick from it.”

That’s when a friend of his, Wilfred Guyette, who worked at the Snake Pit with his brother Harland Guyette, offered him a job at the bar.

“Wilfred said, ‘Freddy, you want a job, I’ll give you a job washing glasses at the Snake Pit,” Carter said. “Two or three days later I was told I might as well bartend too. I didn’t know what I was doing, but I learned.” He joked he occasionally sampled some of his alcoholic creations, but he wasn’t allowed to do any serious drinking on the job, and he certainly wasn’t to get drunk.

That was back in the days when Newport was a bustling railroad community, serviced by both freight and passenger service. Main Street was lined with stores, restaurants, and a number of establishments where people could pull up a seat and have a drink or two. “Newport was really booming in those days.”

Some people might wonder, with World War II raging, why Carter wasn’t off at war fighting for his country, or why he never went although he was old enough. As it turns out, he was drafted, but was rejected for duty because of his small size. He measured around 5 feet to 5 feet, 1 inch, and maybe weighed 100 pounds.

With the start of the Korean War, he received another draft notice. Again he was rejected because of his size.

On the other hand, because of his short stature and weight he was once recruited by the famed boxer Tony Galento to become a horse racing jockey. Carter said he met Galento because his brother Victor “Bombshell” Carter was a well-known local flyweight boxer.

“Tony said, ‘Fred, you are just the guy I want to talk to,” Carter recalled Galento saying. “He said, “I want you to be a jockey for me.”

In response, Carter said Galento told him not to worry, horses wouldn’t hurt him, and he’d make a lot of money.

No amount of money could convince Carter to go anywhere around horses, big money or not. He does wonder if he’d taken up Galento on the offer whether he’d have led a much wealthier life, and not still working into his 90s. “I messed up a lot of times in my life, but I guess we all do,” he said.

However, he said to this day he is still afraid of horses.

About 75 years after working at the Snake Pit, Carter laughs about what his buddy, Wilfred Guyette, pulled on him when he first started working there.

After Carter said he didn’t know, his friend told him to call up to the kitchen of the hotel and ask the cook, George Hayes, to fry up three or four orders of lamb fries.

“I didn’t know what lamb fries were,” Carter said. “I’d never heard of them before so I called up to George and said, ‘George can you fry us up three or four orders of lamb fries?”

“Are you crazy or what?” Carter remembered the cook bellowing back at him. “I can still hear him saying it now. George thought I was crazier than hell.”

“Wilfred laughed like hell at me,” Carter said. “He got me good.”

So, what are “lamb fries”? They are fried lamb testicles. Yes, at the time they were a delicacy in some parts of the country, but not here in the Northeast Kingdom.

“Fred was still wet behind the ears,” his wife said. “He’d never heard of them.”

“The Snake Pit was really not much different than any other bar,” Fred said. It wasn’t anything fancy, just a place where people could order a drink or some bar type food. There were some fights, but nothing out of the ordinary.

“If there was a fight I’d get the hell out of there,” Carter said. However, his wife humorously rebutted his words.

Two or three years of bartending were enough for him, Carter said. He returned to the family tradition of house painting, a tradition he passed down to his sons, Jim and Mike. All three of them are still painting.

Ruth still remembers the day she met the swashbuckling little French–Abenaki man who she has spent almost the last seven decades of her life with.

“It was Friday, June 13th, my 13th birthday,” she said. She was sitting on her family’s doorsteps on Bay Street in Newport when Fred drove by. He stopped and struck up a conversation. Later that year they met at a carnival that was being held at the fairgrounds where North Country Union High School is today and one thing led to another. They have been together since she was 13 and he was 23.

The couple, who now have so many descendants that Ruth needs a calculator to come up with an accurate number, bemoan the demise of the Newport of their youth. They named off some of the stores, eateries, and bars that lined the street. There was even a bowling alley on Main Street.

“Years ago you could not find a parking place on Main Street on Friday nights or Saturday nights,” Ruth said. It was lined both sides of the street with stores and cars and now everything has disappeared.”

It was far from a perfect city, though, Fred said. There was plenty of drinking, and a fair number of bar fights, and the smoldering city dump was located where part of Gardner Park is today, but it was an active community with a lot of spirit. They are so disheartened by the current condition of Main Street, especially the hole in the ground left behind by the destruction of the so-called Spates Block that stretched from Second Street to Central Street in 2015.

“I doubt like hell Newport will ever be anything again,” Fred said pessimistically. “It’s a ghost town.”

With all said and done, though, the couple said the city has been good to them, and they have many fond memories of their life in the lakeside community.